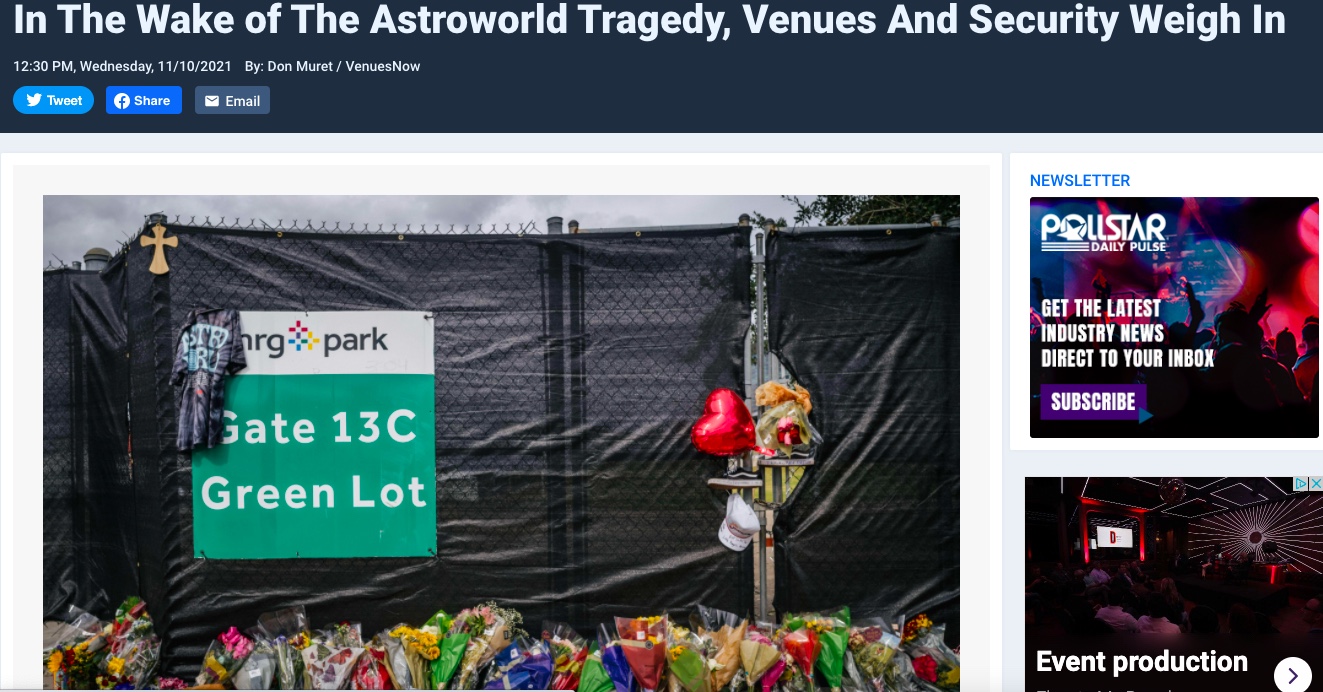 In the Wake of The Astroworld Tragedy, Venues and Security Weigh In

“It’s a tragedy; we all feel for the families that lost people at this event,” said venue security consultant Dan Donovan. “There’s a history of these types of events with this particular performer. Your risk profile goes up significantly and we need to factor that into our overall plans.”

Building temporary infrastructure for a large festival is a challenge in itself, not to mention the crowd control piece. Donovan said it’s more difficult to handle thousands of people in a festival format vs. an NFL stadium concert, where officials have greater control over a GA floor that can hold about 10,000 fans apart from the seating bowl. “There needs to be a significant amount of additional concert barriers that break up the sections so you can minimize the push,” he said. “Bike racks just don’t hold the crowds back. It’s costly but it’s important from a crowd control perspective. Based on the news reports, this is more about the push than anything else.” 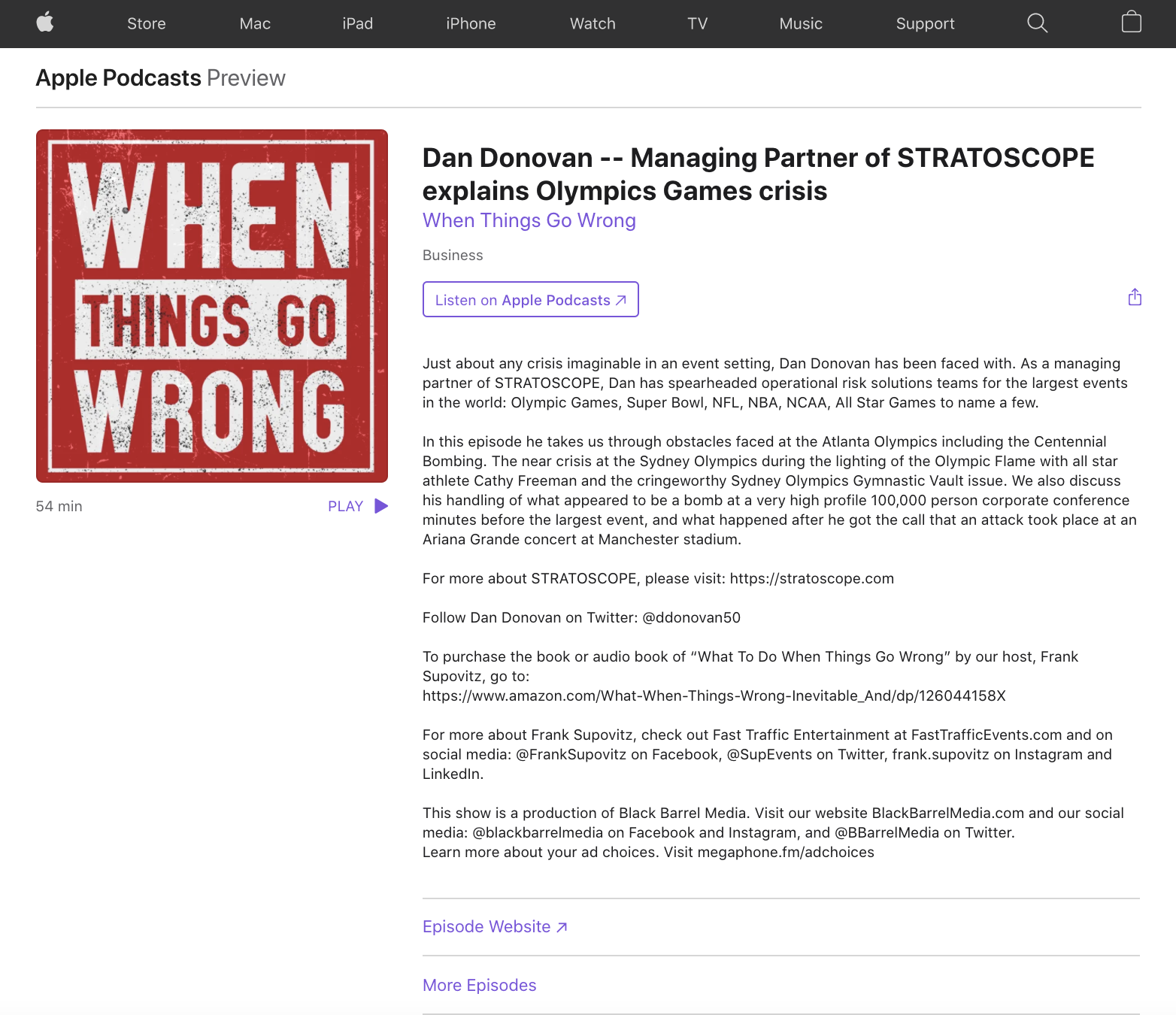 “Just about any crisis imaginable in an event setting, Dan Donovan has been faced with. As a managing partner of STRATOSCOPE, Dan has spearheaded operational risk solutions teams for the largest events in the world: Olympic Games, Super Bowl, NFL, NBA, NCAA, All Star Games to name a few.

In this episode he takes us through obstacles faced at the Atlanta Olympics including the Centennial Bombing. The near crisis at the Sydney Olympics during the lighting of the Olympic Flame with all star athlete Cathy Freeman and the cringeworthy Sydney Olympics Gymnastic Vault issue. We also discuss his handling of what appeared to be a bomb at a very high profile 100,000 person corporate conference minutes before the largest event, and what happened after he got the call that an attack took place at an Ariana Grande concert at Manchester stadium.”

Assessing Risk and Preparing for Civil Unrest in 2021

“We have to always be prepared, first for protestors and secondly for the possibility that these protestors may include individuals with the intent to do damage or inflict harm,” says Donovan, who has personally assisted with the security of such high-profile events as Amazon’s AWS re:invent conference, Google Next and the last six Salesforce Dreamforce conferences — not to mention seven Olympic games, 12 Super Bowls and four NBA All Star weekends. “We’ve seen protestors at a number of events that we’ve been involved with and have even seen them breach perimeters. How do we mitigate risk and what’s the likelihood of it happening at a business event? The answer is really all based on intel.”

Intelligence is critical in determining what risks need to be considered and which risks need additional resources dedicated to mitigating them, Donovan adds. 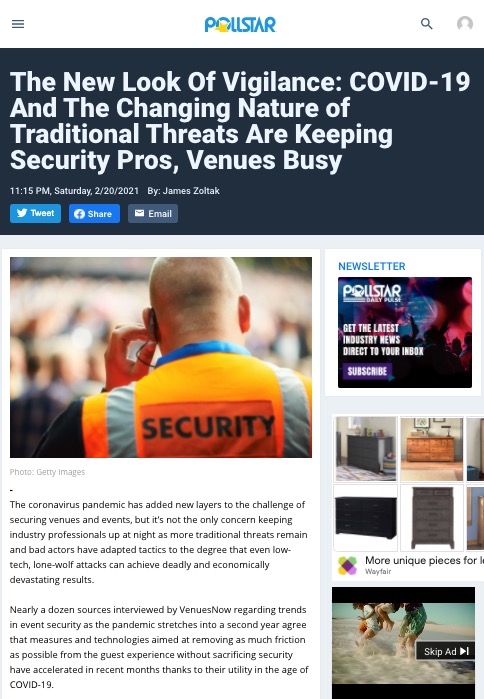 The New Look of Vigilance: COVID-19 And The Changing Nature of Traditional Threats Are Keeping Security Pros, Venues Busy

The coronavirus pandemic has added new layers to the challenge of securing venues and events, but it’s not the only concern keeping industry professionals up at night as more traditional threats remain and bad actors have adapted tactics to the degree that even low-tech, lone-wolf attacks can achieve deadly and economically devastating results.

Nearly a dozen sources interviewed by VenuesNow regarding trends in event security as the pandemic stretches into a second year agree that measures and technologies aimed at removing as much friction as possible from the guest experience without sacrificing security have accelerated in recent months thanks to their utility in the age of COVID-19.

The College Football Playoff is testing the next generation of metal detectors for Monday’s championship game at Hard Rock Stadium, and one NFL team executive predicts the contactless screening system will become widespread at sports venues over the next several years. 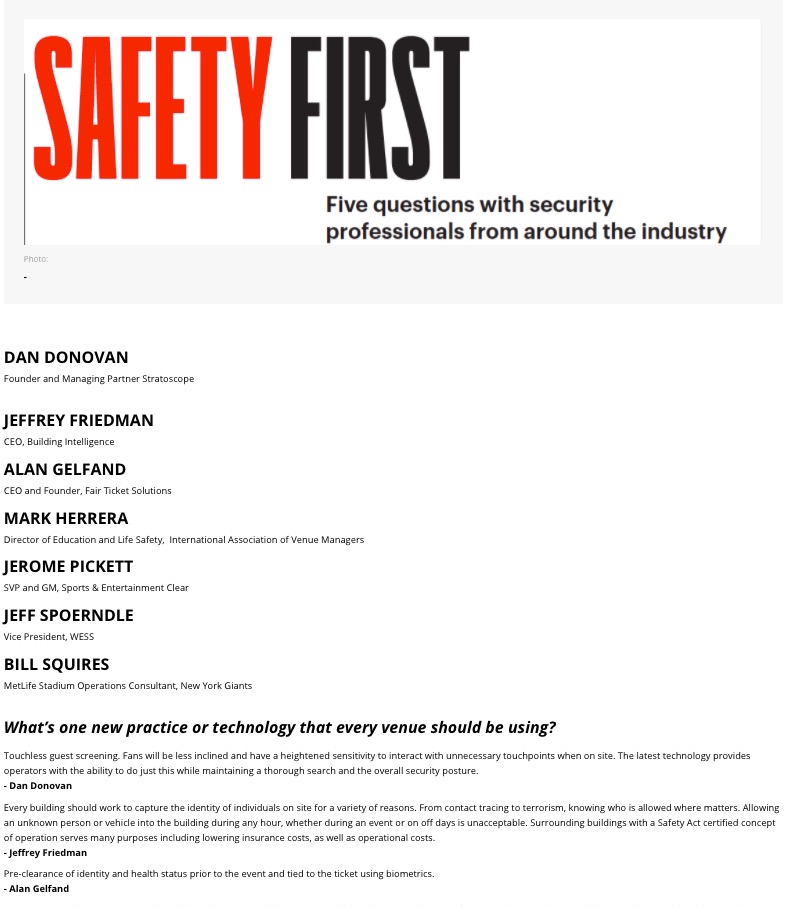 Five Questions with Security Professionals from Around the Industry

What’s one new practice or technology that every venue should be using?

Touchless guest screening. Fans will be less inclined and have a heightened sensitivity to interact with unnecessary touchpoints when on site. The latest technology provides operators with the ability to do just this while maintaining a thorough search and the overall security posture.
– Dan Donovan